With the introduction of vSphere 5.1 VMware has made some changes to going about upgrading VMtools in your VM's. Prior to version 5.1 a reboot of the guest OS was mandatory to complete a VMtools upgrade, but now that we have version 5.1 this is no long required.
Keep in mind you need to run the latest VM hardware version and also run the VMtools version that goes with vSphere 5.1 to be able to do a upgrade without a reboot.
All of this is great but still some things remain, how do you get all your VM's up to the correct VMtools version easy and how can you automate upgrading once VMware releases a new VMtools version
and how to make sure you run the latest version of VMtools on imported VM's or Appliances ?

vSphere has VMtools options / features within the VM properties which you can set and one of them is called "Check and Upgrade Tools during power cycling" and this option has been in vSphere since at least version 4.1, but to my knowledge not used a lot. 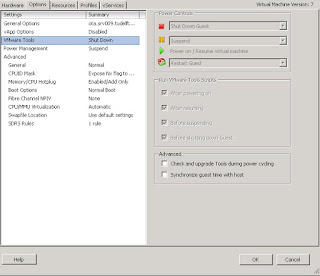 When you check this option box the VM will check and if there is a newer version of VMtools available upgrade upon every reboot. When looking and VM's with a Microsoft OS, those will need to reboot to complete their patches and updates on a regular basis. So why not enable this option in you VM's ?
I find that keeping your VM's up-to-date when it comes to (security) patches important and for me VMtools is something a lot of VM admins tend to forget in this process. But if you run a large vSphere environment you don't want to go and open the properties of all VM's and to enable this feature !
That's were PowerCLI comes in handy, because you can script the enable (or disabling) of this option.

You could change this script so it suites you needs, for instance you could use it to only set this option on a selected number of VM's which you gathered in a CSV file. Like in the example script below.

After all changing such a small script is done a lot quicker then having to go thru all of your VM's one by one to set the option, just imagine having 1000+ VM's in your vSphere environment !
This option is still valuable in vSphere 5.1, although you don't need a reboot anymore when upgrading VMtools it is still a task that is easily forgotten. A other way of making sure you don't forget is by the use of VUM (VMware Update Manager), but this takes some time to setup a baseline and baseline groups. That is if you already have VUM installed in vCenter.
Posted by Leon at 16:30